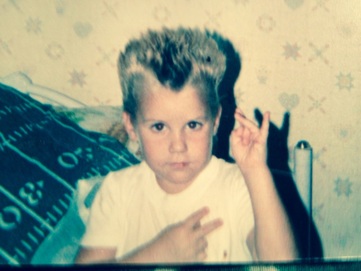 Age 4. Flashing gang signs. Or doing sign language.
Hey! So you've come to this page. The old bio page. I know. I look like I'm from the mid-west....

Well, that may be true, but while I was born in Steubenville Ohio, I moved to Ocean City Maryland (lived on the land part, not the ocean part) at the age of 8. There was a divorce. I'm fine. I was too young to notice. Once I got to Maryland, I began making films with the camera my mom bought for my sister (sorry sis. I owe you $200 and about 150 VHS tapes). I'd like to think I was a great little filmmaker, but I saw some of these movies when I went home last summer and these movies are terrible! I wish I could smack the 10 year old me. Horrible filmmaker.

Thankfully I got older, and I got better. I then went to school in Savannah College of Art and design to study filmmaking, drinking, and acting! It was a great time. I think I made a few films there. One of them, The Fakers, got into the Savannah Film Festival, winning the Savannah Film Commission award.

Since moving to Los Angeles in 2009, I've worked as a head of production for the Laugh Factory, produced/wrote and starred in a long running show at the Improv Lab called "Comedy Slice", have been on 2 Improv Olympic House Sketch Teams (Secret Family, Redford) and studied improv and sketch writing at UCB and Improv Olympic.

I have acted in CollegeHumor Originals, for ABC Comedy, a Sports Jeopardy Commercial, and billion of online sketches (ok, more like 20). On my free nights, I play guitar and ice hockey. I also try to hang out with my brother as much as I can because he's my best friend. And family is pretty important to me.

Thanks for being interested in the most boring part of the page. Now please, go to the videos page or something. Or REDDIT. Everyone loves REDDIT.
Powered by